Today’s Daily Post prompt – Ready, Set, Done – Our free-write is back by popular demand: today, write about anything — but you must write for exactly ten minutes, no more, no less.

This was begun at 13:04 and finished at 30 seconds over 13:14 😉 The elephants in the picture are my ever growing collection which sit next to me at my desk; and yes, I do make up adventures for them! 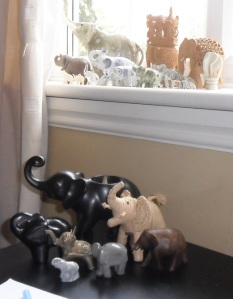 Milly climbed onto the back of the mottled grey elephant and settled into the curve of its neck. She giggled, clapping her hands over her ears as the elephant raised its trunk and trumpeted, before lumbering off into the verdant greenery of the jungle. Swivelling around to look over her shoulder, Milly counted twenty-one other elephants forming into an untidy herd behind hers. They ranged in colour from jet black to sandy yellow, from the biggest – which she rode – to the tiniest which scurried along frantically trying to keep up.

For a moment Milly was worried about the tiny one, but just when she thought it about to be trampled underfoot by a massive brown male with a howdah on its back, the adult paused in its stride, let the infant lollop through and then continued on, crisis avoided. Milly marvelled at how the rambling herd managed to keep the smaller members close to the centre without any particular attention to the matter. Then her attention was diverted by a terrifying roar somewhere up ahead. She clung to the neck of her elephant, feeling it pick up speed, its body swaying from side to side, its trunk upraised and issuing short blasts of sound.

A gigantic lion, its fur a deep brown, its mouth laden with blocky teeth stepped onto the grassy path, snarling and roaring and Milly was petrified, but her elephant feared no thing so small. It charged and Milly hear the thunder of many feet behind her as the herd followed the leader. The lion held its ground for a moment then, with a final roar of defiance, it turned tail and vanished into the tall bushes. Milly grabbed a currant bun from her pocket and offered it to her ride, whom she’s named Nelly, patting the warm, wrinkled skin under her hands with delight.
“I wonder where we will go now.” She mused aloud.
“Milly, tea time. Remember to put Grandma’s elephants back where you found them.
“Next time we’ll visit the king and take tea at his palace” Milly assured her herd before gently replacing them on grandmas window sill.

I cannot see baby elephants without hearing this music in my head!